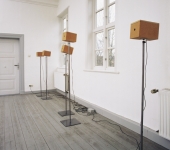 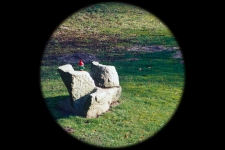 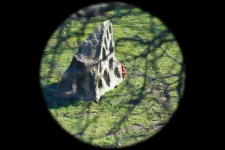 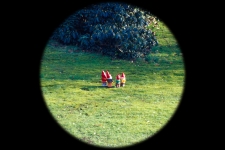 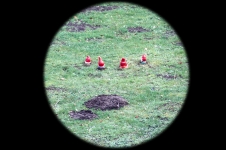 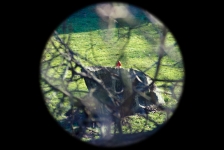 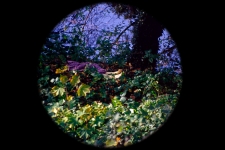 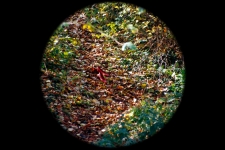 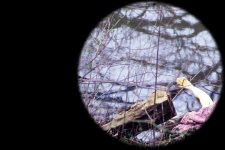 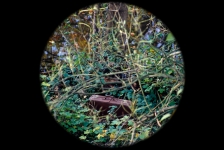 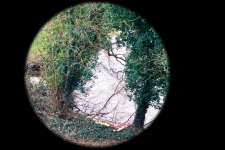 Zur schönen Aussicht (To a Pretty View) was created in the course of Johanna Smiatek´s stay at Künstlerhaus Meinersen in 2002. A total of ten photographs were presented in illuminated boxes, mounted on steel tripods and fitted with monocular lenses. Five of the boxes stood in front of an east-facing wall. In these, you saw garden gnomes, mischievously populating the front yard of the Künstlerhaus, alone or in groups. Another five boxes were displayed in a second room facing west, and showed a number of the artist´s objects placed in the landscape behind the house, like a suitcase or a waxen arm. Johanna Smiatek had photographed the objects from just the windows of the rooms where the installation later was. The viewer saw the scenes from the same viewpoint that they were occupying in actual fact. The illuminated boxes therefore appeared to be fictional filters to this reality. The installation offered an opportunity to switch between different realities and playfully compare a staged world with one´s own point of view.
Zur schönen Aussicht is part of a continuous work series, in which the artist examines an obstructed, indirect view of reality in varying ways. Another creation from 2002 is the object Auf Reisen (On the journey…). It is an old suitcase that allows a glimpse into its innards through a peephole. Viewers see an illuminated scene with a dais-enveloped bed, underneath which two feet protrude. However this model world fools the observer as to its actual size, so that he cannot easily connect the object´s inside to its outside.
Both 2002 works have a common precursor in an installation that the artist created at the end of her studies in 1997 and which was purposely rigged to obstruct the view into her atelier. The spectators were asked to stick their heads through a hole in wall, into a box that was fitted with a telescoping lens, greatly minimizing the view. (Quote Marc Wellmann)