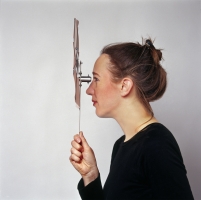 " … in a fan work called Mata Hari (2004), where the doubling of the view can be exercised when the fan is either open or closed. The spy-hole being placed in the hand structure of the fan, the artist again intimates the ‘doppel’ as an either /or sense of the object´s utility, a game of now you see me, now you don´t, while the holder of the fan has a possibility to perpetuate or sustain the prolongation of the gaze. A repeated pattern of role and function reversal is common to many of Smiatek´s object-sculptures …" (Quote Mark Gisbourne)