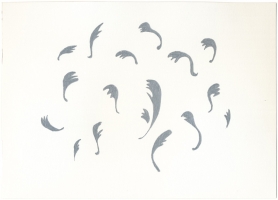 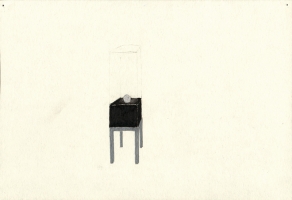 " … An installation of object-sculptures called Gelée Royal (2007), makes the point clear. ‘Royal Jelly’ is the honey secretion that is fed by worker bees to the particular larvae who will later become the Queen, and therefore a singular instrument that enables them to set up their own hive and honeycombs. It is the Queen bee who sustains future generations of larvae through her role as the egg layer. The royal jelly is only ever consumed by the Queen of the hive, and thus is the singular purpose to which the drones and worker bees attend. The simile to today´s fashion industry with ist supermodels and focal points of desire and consumption is but a small step. Indeed, the term ‘Queen Bee’ explicitly refers to the central locus of a female
system. The capitalist nurturing of illusionary desires as the primary means to sustain modern consumption, remains an important and deliberate aspect of Smiatek´s installation Gelée Royal , which includes a series of works that interact with one another. … " (Quote Mark Gisbourne)