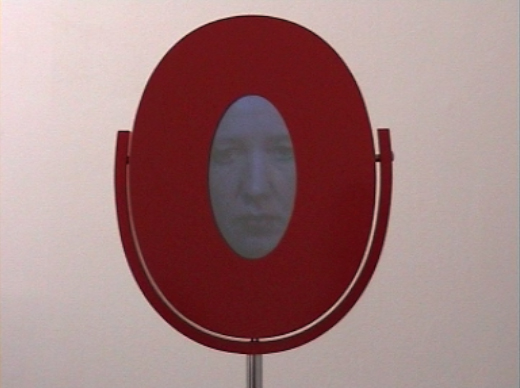 The work called Magic Mirror relates to narcissism, selfreflection and doubts.
The typical makeup mirror gives the occasion to the beholder to view himself. After a short time a second face will be rise behind the mirror. It´s the face of the artist, who makes up herself. The process of make up occurs in regular intervals and disappears. In these moments the beholder can views only himself. At the same time a spoken refrain sets in. It is the original record from the fairytale of Snow White filmed in the year of 1937 in Hollywood: “Magic Mirror on the wall: who is the fairest one of all?” (Spieglein, Spieglein an der Wand, wer ist die Schönste im ganzen Land?)
Already in the year of 2006 the artist made sound cuts in her work Angels Landing. In this work the beholder could see the mountain top of Angels Landing through a telescope and could hear at the same time the sound cut from different movies.