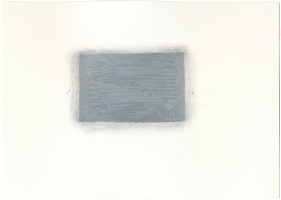 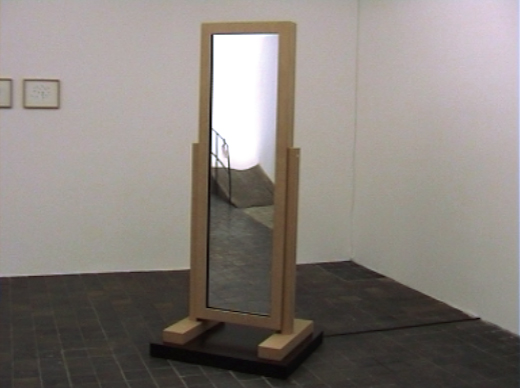 Essentially the piece is based on interaction with the viewers. When they approach the object, attracted by a mirror image, a distance sensor triggers a motor to vibrate the mirror. The image dissolves into a shivering blur that can only be overcome at a distance, once the kinetic disruption ceases. An ironic commentary on the desire to watch ourselves in the mirror. Personal vanity is effectively restrained by this work of art.
Ovid´s myth of Narcissus comes to mind immediately, the story of the young man, who comes across his reflection in a pool and falls in love with it (believing it to be someone else). Each try to grasp the desired body ends in its disappearance in the water´s disruption. As in Johanna Smiatek’s piece, too much proximity makes the illusion disappear.
……
The artist named the prototype of the quivering mirror (a wall-mounted object) Paris – or like jello on legs, referring to the ‘Judgment of Paris’, the tale of the Trojan prince, who chose the goddess Aphrodite over Hera and Athena as the most beautiful of all women. Again and again, Johanna Smiatek deals with time-honored clichés that she subverts or renders absurd in the net of manifold references that she weaves between her works. (Quote: Marc Wellmann)