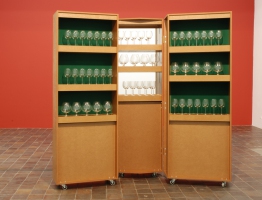 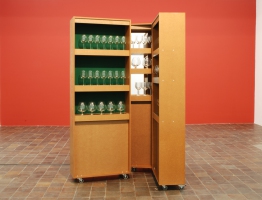 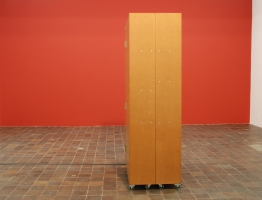 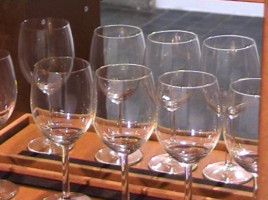 Different from the female clichés that Johanna Smiatek often deals with, Bar is aimed at the male-tinged domain of excessive alcohol consumption associated with private clubs or house bars. Interacting with the viewers with the help of a motion sensor is again decisive. Approaching the head-high cupboard filled with various glasses sets the boards off vibrating, so that the glasses start clinking and clanging. Visibly related to Like jello on legs and the mirror surface blurred by vibration, it deals with the antagonisms of a desire. In this case the trembling hands of a drinker are associated. Another playful element is startling the viewers, who set off the rattling commotion with their bodily presence in front of the object. Is this the precursor of an earthquake with unforeseeable consequences? Here, Smiatek´s imagination is set in motion by the opening passage of Douglas Adams’ ‘Hitchhiker´s Guide to the Galaxy’ (1979), where Planet Earth is surprisingly confronted with her destruction by aliens. The question that the book´s protagonist is confronted with in this situation is: “Should I try to save myself? Or go drinking?”.(Quote: Marc Wellmann)